How The Glamorous World of London Fashion Week Came to Be

Oh, to be a part of the glamour world! Now wouldn’t that be awesome? Let us be honest here, every one of us, at some point or another, dreamed of becoming a supermodel, or potentially, to become part of the fashion world.

Those beautiful dresses, worn by beautiful models, walking down a runway with all eyes on them; no wonder it is called the glamour industry. But did you know that despite being the hot topic of the fashion world, the London Fashion Week had a start that was a little less than glamorous?

As the catwalk season closes in, let us take this opportunity to get ourselves better acquainted with how it all started.

Started from the bottom

Everyone and anyone who knows even a little bit about the fashion world, would recognize the name of the “London Fashion Week”. It is one of the most well-respected fashion events to occur around the globe.

However, as significant and impactful it is today, it had a very humble start. From information gathered from Betway casino surveys, let us look at how the London Fashion Week came to be.

The first Fashion Week to be held was in New York in 1943, followed by Milan and Paris in 1958 and 1973, respectively. London was the last to join in 1984, thus becoming the youngest one of the lot.

It had only 15 scheduled presentations and catwalk shows, with only 25 designers participating. Yet, it was able to serve its purpose by delivering quality work. This further solidified a commitment for funding from the British Government, thus securing a long-running future.

But that was just the beginning. The London Fashion Week kept growing, evolving, and expanding into what we know it as today— one of the most prestigious fashion events of the world.

Now at the top

From the tent outside the Commonwealth Institute, the London Fashion Week has come a long way. It is only held indoors at The Store X on The Stand in central London, with 100,000 people coming to attend the show.

It has a yearly income generation of 269 million euros, and is only second to the New York Fashion Week, despite its short time. In 2020 alone, the last show before the pandemic, the London Fashion Week, saw over 5,000 guests, and over 250 designers.

If we were to keep aside the numbers, the London Fashion Week is also known to launch careers of one of the most influential designers around the globe.

However, due to the pandemic, the London Fashion Week might be facing a few hurdles, but that won’t stop it. In February 2021, it will stream its presentations, catwalk shows, and exhibitions live.

All the collections will be unveiled online, and the respective sale will be held there too. Despite the challenges, the London Fashion Week remains glamorous and unstoppable in its fashionable way. 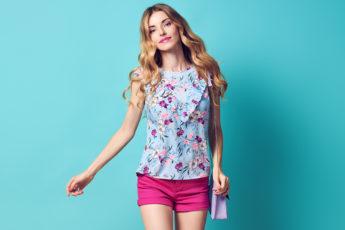 3 Ways to Master Florals this Summer

Iconic Handbags You Need to Know About

The Pros and Cons of Surgical Rhinoplasty

December 17, 2021
« Previous post
These Golden Blonde Hair Colors Will Add Sunny Vibes to Your Look Ahead of Spring
Next post »
Get Ready for Spring with These Transitional Outfits