We’re all in the midst of summer, but fashion houses are dreaming of fall. While fashionistas can’t get over the latest trends of the season, the ones for autumn are already in. And we must admit, they’re better than ever. Coach is another luxury label to release their Fall 2018 campaign this month. What’s even better, Stuart Vevers decided once again to tap his favorite muse and the brand’s ambassador Selena Gomez. The singer flaunts a number of dreamy looks, which are expected to be huge during the colder days.

“I love the way that we have pushed the Coach gang further this season to be more unique, diverse and just overall cool in their attitude. It’s how I see people here in New York enjoying wearing clothes and just feels really relevant to me.”- Stuart explained in a press release.

This is Selena’s third Coach campaign since joining the label in December 2016. The singer once again stood in front of Steven Meisel’s lenses during the photoshoot. Just like all the times before, the iconic Pat McGrath took care of her makeup. Celebrity hairstylist Guido Palau handled the hairstyle, while Fabien Baron is the creative director of the ads. In the shots, Gomez is rocking a fabulous sheer black dress, with a statement lace neckline. The singer is also holding one of Coach’s latest additions in the bag selection, a printed black piece.

The all-American vibes in the line are more than obvious. This is something that Vevers introduced once he took over the leading spot at Coach. Each piece features Western details, done in a very sophisticated way. In other words, Stuart managed to perfectly balance between the old and the new. New York in the 90’s was the inspiration behind the designs, makeup, and hair. For all the lovers of prairie dresses, this collection is the dream. Vevers included an array of fabrics among which lace and silk. Thanks to the fresh perspective of the designer, the young, inspiring ambassadors, and the diverse cast, Coach is making some significant progressive changes. 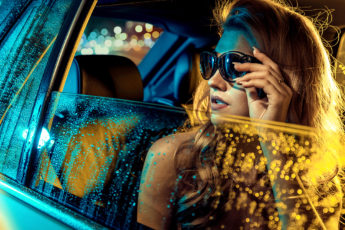