Kim Jones is the New Artistic Director of Dior Homme

Kim Jones left Louis Vuitton at the beginning of 2018 with a memorable show. Just a couple months later he is ready for new challenges. The famous menswear designer has been announced as the new creative director of Dior Homme. The British designer will replace Kris Van Assche, who left Dior just recently. He was at the helm of the menswear sector of Dior since 2007.

Kim Jones has reshaped the menswear arm of Louis Vuitton in many revolutionary ways. The designer preserved the luxury travel feel of Louis Vuitton but added cool streetwear elements in its collections. The street aesthetic is insanely popular now, and Jones managed to make pieces that were always in a high demand. The designer also led Louis Vuitton’s collaboration with the infamous streetwear label Supreme. Fans from all over the world had been waiting for days and hours in front of their pop-up stores to get their hands on the exclusive collaborative collection. The pieces were later sold for 1.5 times or more of their original price. These two brands had legal issues in the past which made this collaboration even more exciting. In 2000 Supreme received a cease-and-desist order from Louis Vuitton for using their monogram on a skateboard.

Altogether Kim Jones turned Louis Vuitton into a leading menswear brand. With friends such as Kanye West and David Beckham with their family sitting front row, the brand’s shows were a celebrity affair. Van Assche, on the other hand, had been running Dior Homme successfully, but without big jumps. He succeeded Hedi Slimane at Dior, who is now the new creative director of Celine. Kris Van Assche continued to nurture Dior Homme’s sharp aesthetic throughout his career at the fashion house. Dior most certainly wishes for some changes in the future. Kim Jones undoubtedly knows how to keep a brand’s heritage while designing pieces that are relevant to nowaday’s customers. With his arrival at Dior Homme, we should expect a certain change in the aesthetic.

There isn’t really anything impossible for Kim Jones. The designer managed to convince Kate Moss to walk for Louis Vuitton on his last show. The former supermodel was off the runway for years and Jones was the one who brought her back. He closed the show together with Moss and Naomi Campbell. It was an iconic closure for an end of an era. We expect to see another exciting show from Kim Jones, this time for Dior in Paris. Hang tight until June for the first collection by the designer.

Get My Red On Red Outfit! 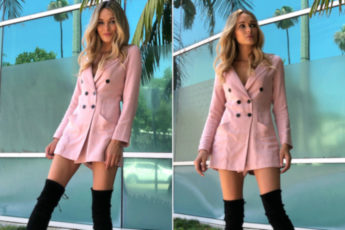