The gorgeous Indian actress rules the red carpet everywhere she goes. Last night for the CFDA Awards Priyanka stunned in a shimmering black dress by Michael Kors. The ankle-length dress with a mermaid finish accented her perfect figure. She also wore an oversized black belt and a pair of sky-high strappy sandals.

Bella gave everyone one more reason to think that fuschia pink is the new IT-color. The popular model showed up in a hot blazer-like belted mini dress by the brand Off-White. The fuschia blazer dress featured flared sleeves and a deep V-neck opening. Bella finished the look with a light pink clutch bag and a pair of black sandals with a transparent strap. The model managed to combine three of the biggest trends this season: hot pink color, blazer dress, and clear strappy sandals.

The older Hadid sister made a huge fashion statement with her monochromatic outfit last night at the CFDA Awards. Gigi decided to go with a very minimalistic dress by the brand The Row. The ivory colored maxi gown is created by the sisters Mary-Kate and Ashley Olsen, that are the designers behind this fashion house. Gigi added a full-length coat in the same color. To complete the look she went for a pair of sparkly flats, by Stewart Weitzman. The diamond choker by Lorraine Schwartz perfectly complemented her sparkly flats.

The beautiful Victoria’s Secret Angel had one of the most head-turning looks at the CFDA awards. Sara appeared in a mesmerizing cobalt blue dress by J. Mendel. The semi-transparent pleated gown had a long flowing cape that made the whole appearance more dramatic. She paired the dress with silver strappy sandals by Giuseppe Zanotti and a pair of diamond earrings.

Monae had one of the boldest looks at the CFDA Awards 2017. She looked very chic in the asymmetric black and white jumpsuit by Christian Siriano. The jumpsuit has one sleeve and looks like a half-blazer connected to the pants. She ruled the red carpet with a pair of round sunglasses and a lot of statement rings. A perfect proof that a cool outfit can dominate the red carpet.

The veteran of red carpets, Heidi Klum was not afraid to show some skin. Her Zac Posen white dress got all the attention. The model showed a lot of cleavage in the low-cut long dress. The golden long chain that she wore was the perfect detail to spice up the look.

Diane shined in a strapless long dress by Monse. The beautiful cobalt dress was embroidered with eye-catching gold sequins and featured a high side slit. The actress complimented the dress with a pair of Giuseppe Zanotti sandals (the same as the ones that Sara Sampaio wore) and a pair of asymmetric golden earrings.

The supermodel appeared with a very bold and edgy look. She chose an unconventional Balenciaga gown that featured a voluminous bow. Anyway, the dress was not the greatest part of the appearance. The most eye-catching detail of the whole night were Alek’s neon yellow boots, that definitely deserve an applause. The model flaunted her edgy style and showed that a pair of the right boots can make such a difference.

The world-renowned actress doesn’t miss the opportunity to shine anywhere she goes. For last night’s awards, she stunned in a black Oscar de la Renta dress. The black strapless dress was embroidered with diamonds. As if the dress wasn’t enough, Nicole perfected the look with an amazing diamond necklace with pink-colored stones.

The young supermodel chose an elegant Victorian-style black and white dress by Alberta Ferretti. The ruffled dress featured a black bow at the waist. Additionally, the red shoes gave life to the whole appearance. 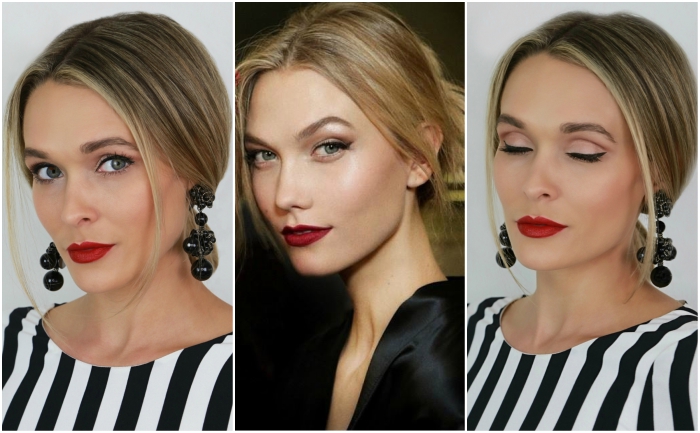