Isabel Marant used the words “everyday femininity” to sum up her spring/summer 2017 collection for Paris Fashion Week; in all reality, the collection had feminine points, but the overall essence of it read as urban masculinity. This came as a result of high-waisted pants and oversized sleeves.

There was a good amount of femininity that came from the cinched waists, floral prints, and through some of the line’s dresses. So while femininity was present, it’s hard to point to it as the defining element of the Isabel Marant spring/summer 2017 collection.

But perhaps this is a bit more feminine than meets the eye, especially in the context of French fashion. The designer, based in Paris, has a firm understanding of the everyday Parisian woman, so in that regard perhaps the idea of “everyday femininity” is in tighter focus than what one outside of that sphere may assume.

In this collection, Marant showed her expertise in mixing prints and creating a story through a sporty, urban aesthetic. To give it a voice, her line was feminine with a twist.

There didn’t seem to be a single source of inspiration at play with this collection, which made for a more-encompassing line. The sporty pieces actually did come across as athletic at times, so the purposes of the clothes seemed to even reach the gym, and then also moved all the way to a cocktail party.

It seems that Marant just had a really good idea of the woman she wanted to design for and decided to create an entire wardrobe for her, without taking the time to bring in a tie-in via a source of distinct inspiration, as she generally does. In fact, the designer said it herself, after the show in a backstage interview, that, “I think it’s the first time I didn’t really have a theme. I just followed my feelings.”

Even the shoes promoted this sporty, urban feel, since the designs were so unique ” some sandals featured metallic fabric, and others had fabric pulled up creating the illusion of thigh-high boots. The shoe designs continued on in like fashion, always acting as the base to the outfits, and also replacing what we generally see from the designer, which are boots that carry a tomboy edge with them.

Speaking of moving away from what we generally see, there were quite a few more dresses than we generally expect from Marant. The designer admittingly was more inclined to designing dresses and other girly garb, which is where this idea of flirty romanticism came from that was clear throughout the line, but of course we couldn’t have expected anything else than for the designer to walk down wearing her staple slouchy clothes ” satiny lounge pants and an oversized Marant t-shirt.

And it was that comfy practicality that we could naturally see interspersed throughout her collection. The ready-to-wear element was huge, especially compared to other top-name designers, which is something we have grown to love and look forward to each season. 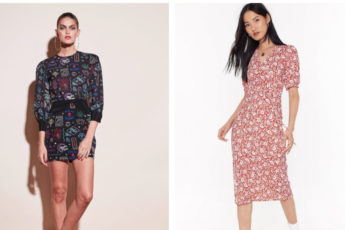