The see now, buy now consumer-facing fashion scheme is finally here, people! Some really smart fashion guys hit on a brilliant idea that, damn it, why people should wait half a year to purchase the pieces they are just swooning over at the moment! And here we are finally witnessing the whole concept brought to life with the Tommy x Gigi Tommy Hilfiger fall 2016 #TOMMYNOW collection debuted at New York Fashion Week on September 9 at 7 p.m. EST.

The fact that you can already purchase Tommy Hilfiger‘s runway pieces on Tommy.com is not the only exciting thing spanning the fashion circuit at the moment. What really stirred up the social media platforms was that their favorite Gigi Hadid has now a hand in Tommy Hilfiger pieces.

Street-style adept Gigi, whose personal style stands so close to the brand’s classics, seemed so much in her element yesterday on Pier 16 at the South Street Seaport. And if the Tommy Hilfiger fall 2016 runway show held in February was staged in the Park Avenue Armory transmogrified into T.H. Atlantic cruise ship, this time around Pier 16 turned into a funny carnival with many lights, rides, contemporary tattoo booths, cotton candy machines and a ferris wheel.

A whopping 2,000 guests were welcomed by the Tommy Hilfiger x Gigi Hadid fall 2016 runway show among them being Doutzen Kroes, Olivia Palermo, and Kris Jenner, while Gigi’s BFF Taylor Swift, who came to support her, was a Tommy Hilfiger girl from head to toe, at the end of show hearing sweet words “I love you’ from her bestie.

Gigi opened the show wearing a band jacket over a knotted top and leather form-fitting pants. The name of the game at the Tommy Hilfiger fall 2016 show-now-buy-now collection was versatility, crazy mixtures, laid-back athleisure relaxation moments, in a nutshell all that could make Gigi’s future off-duty looks.

Then it was all about tracksuits in white and red with Tommy Hilfiger printed here and there, happening in silk fabric as well with a chic factor to them. We also saw a soupcon of fur on the runway making sartorial treasures under the guise of coats and hoodies.

Amid so many sportive, athleisure pieces it was those lightweight tulle dresses with nautical prints that were definitely off the track channeling bohemian spirit.

Yes, this was all so relaxing and comfy, getting us feel the genuine queens of fall and making us loyal fans of the Tommy Hilfiger x Gigi Hadid collaboration. And when the duo appeared at the end of the show to take a bow, one could hardly remember someone so successfully combining the rich modeling experience and novice designer debut as it could do Gigi Hadid. 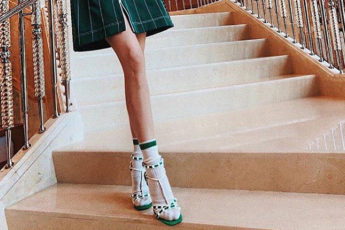 Socks with Heels Is the Statement Combo You Need This Spring