Perfumer Olivier Polge has taken on a very daunting task, perhaps even one of the most challenging you could think of. Chanel No. 5 is easily the most iconic scent in the industry, and Polge has just announced the released his own version of it, dubbed Chanel No. 5 L’Eau, which hits stores this coming fall. The new take is a fresh and clean at its core, with some sexy undertones that have truly taken the classic scent to a whole new level.

As a bit of a background, it’s important to note that Polge himself is the son of Chanel master perfumer Jacques Polge, who began his role in the label back in 1978. Olivier Polge strayed from the perfume industry for quite some time, perusing the fields of architecture, graphic design, and piano, before returning to his calling in the beginning of the millennium, turning out his popular hits like Florabotanica and Flowerbomb.

Then, in 2013, he succeeded his father as master perfumer for Chanel, where he began to reinvent some of the classic house scents, with groundbreaking results. His new goal of tackling a revitalization of Chanel No. 5 was likely the biggest challenge of his career, and the result is definitely as sexy and daring as one might hope.

“I wanted to tell the story in a different way and with very contemporary aspects,” Polge told Refinery, on his goal of creating “the freshest version of Chanel No. 5.” In order to tackle that challenge, Polge had to break down each ingredient held within the classic perfume. “No. 5 is a pillar of our identity, and we produce it all year long. So for any fragrance we create, [Chanel No. 5] is in the back of our mind and part of our sensibility.”

In order to maintain the integrity of the scent, the May rose is still the main floral base in Chanel’s new No. 5 perfume. This is a huge and tedious part of the process, as the May rose only goes into bloom in Grasse for two weeks per year during its namesake month, and from there the flowers must be taken to a factory in under two and a half hours, or else they would lose their robustness. So the piece is not only a signature staple for the brand and this scent in particular, but it is one of the most complex in the industry ” no wonder the scent is so unmistakable!

As far as where things begin to differ, Chanel’s new No. 5 L’Eau fragrance has hints of aldehyde, jasmine, sandalwood, and ylang-ylang. The ylang-ylang is the most complex of these other scents, as its presence in L’Eau is isolated due to a unique process of distillation that brings out the crispness of the flower.

“Natural, raw ingredients are almost fragrances by themselves,” Polge noted. “We can be much more precise today than we used to be, and we have the ability of redistilling the concentrate.”

The final product is just what Polge had in mind, and just what we would hope for from a revitalization of such an iconic fragrance. It is crisp, fresh, light, and energized enough to keep things exciting. It’s a new version of Chanel No. 5, but in no way replaces the original, thankfully. As Polge said, “We all have in mind so many things about Chanel No. 5. It’s a story that takes up so much space in our minds.”

For this story, Chanel decided to name 16-year-old Lily-Rose Depp as face for the perfume’s ad campaign, which will be launched with the perfume and will be directed by Johan Renck. Depp is no stranger to Chanel, as she is currently the face of its Pearl eyewear collection, which began last September. She is an up-and-coming actress and model, with a bit of a head start push due to her famous parents, Johnny Depp and Vanessa Paradis; Paradis has been an ambassador of Chanel since the ’90s, in fact (remember the iconic birdcage fragrance add in 1991?).

Be ready come September with credit card in hand, when Chanel No. 5 L’Eau hits the market! 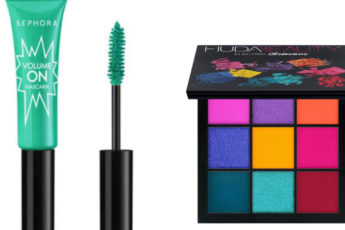 Best Neon Makeup Products You Can Actually Pull Off In Winter