Gigi Hadid and Zayn Malik are one of the most talked-about celebrity couples of today, so naturally we couldn’t expect them to stay out of headlines for long. Most recently, on Monday evening a set of photos began circling social media, featuring shots of the power couple, in what was said to be a spread for an upcoming issue of Vogue. The images were originally dug up by super-fans of the couple, and of course they were held in speculation, since no one could be sure of the intent or not.

But, like clockwork, the very next day Vogue posted a preview for the spread of its May issue on its website, with the title “Gigi Hadid and Zayn Malik’s Wanton Weekend in Naples.” This instantly rectified the social media publishings, making viewers feel lucky to have seen the editorial shots before were actually announced for magazine publication. The images were shot by Mario Testino, which was what the social media posters initially speculated due to their aesthetic.

The images themselves featured Gigi Hadid and Zayn Malik on a romantic, sexy trip to Naples, much with the “wanton” nature as promised by the title. The clothes worn by Hadid and Malik were rocker chic, sometimes almost edging on rockabilly. The model was dressed in various looks, staying glamorous and with the romance promoted by the rest of the photoshoot. Hip-hugging dresses showed up Hadid’s killer body, and plenty of gingham, complemented by a beehive hairstyle, added a surprising level of southern charm. One photo featured the model in a high-waisted red gingham bikini showing off her athleticism by having her pose upside down for a shot. Hadid’s looks were all from luxury fashion houses, like Dolce & Gabbana, Miu Miu, and Prada.

The now-solo singer was dressed in leather jackets and charming slim suits, and a shot without his shirt showcased Malik’s full sleeve of tattoos. And naturally nothing special needed to be done to his hair, as the singer has a distinct signature hairdo that fans around the world have come to expect.

Photos were taken in a variety of locations, each unique to the next. For instance, one shot featured the stunning landscape of Naples in the distance in full color, two were shot with a motorcycle (one cute photo beside it and another riding), some were in the bedroom, and others still were black and white around the city. Altogether, the photoshoot showed an all-encompassing romantic vacation.

This is the couple’s second time filming together, with the first being in Malik’s “Pillowtalk” music video. It is undeniable that the two have fiery on-screen chemistry, so it’s not difficult to assume they would off-screen as well. Here’s to more photoshoots like this in the future! 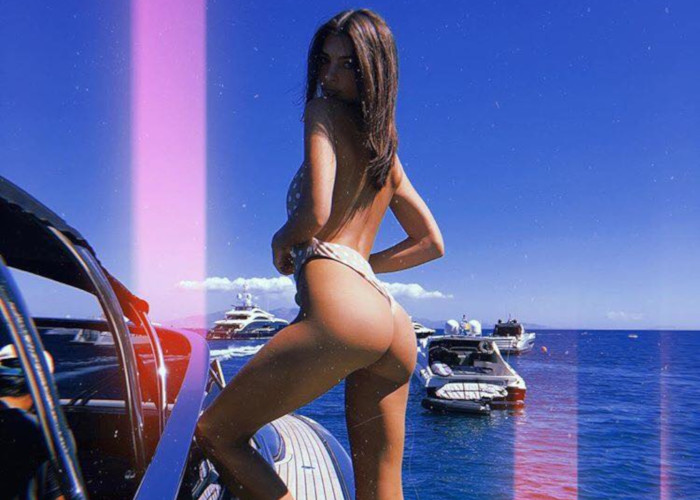