A collaboration between French fashion designer Sonia Rykiel and Lanc‚Äö√†√∂¬¨‚Ä¢me has been announced, right amid the artistic explosion that is Paris Fashion Week. The resulting line of makeup is said to be colorful, and will embody the bohemian and upbeat nature of France. According to Lanc‚Äö√†√∂¬¨‚Ä¢me, it is “full of color, resolutely joyful with genuine freedom of tone inspired by the spirit of Saint-germain-des-Prés.” This is a similar spirit to what Rykiel’s last collection featured: a contained explosion of sophistication and color.

Neither party in this deal is new to the realm of collaborations. Lanc‚Äö√†√∂¬¨‚Ä¢me has previously paired with other esteemed designers, while Rykiel once created a capsule collection in collaboration with H&M. And for executives at Lanc‚Äö√†√∂¬¨‚Ä¢me, tapping Rykiel for a makeup line was practically a given.

“Sonia Rykiel is the ultimate incarnation of a certain idea of the Parisian,” began Fran‚Äö√†√∂‚àö√ºoise Lehmann, Lanc‚Äö√†√∂¬¨‚Ä¢me’s managing director. “A woman who cultivates her joyfully emancipated freedom and refuses the imposed choice of depth or lightness, a woman who is simultaneously seductive and in love. It is the ‘Saint-Germain spirit’, the idea of happiness in one’s own image, actively constructed every day.”

In his rather drawn out, prose-like statement about the partnership with Rykiel, a lot was brought into words about the designer’s personality. Sometimes it is difficult to find the proper words to tell of a person’s characteristics, yet this relatively short dialogue sums everything up rather well in this case. But the admiration went both ways. Julie de Libran, artistic director of Sonia Rykiel, gave her insights on the partnership.

“In Lanc‚Äö√†√∂¬¨‚Ä¢me I see the free and joyful Rykiel woman who makes her own choices,” she said. “A beauty that is sometimes natural, sometimes sophisticated, but never subjected to diktats. Our two houses share a modern vision of femininity which, I believe, is tangible for today’s women.”

Executives at Rykiel’s brand can see their clients wearing Lanc‚Äö√†√∂¬¨‚Ä¢me, and Lanc‚Äö√†√∂¬¨‚Ä¢me is overjoyed to work with such a joyful designer. Regardless of what direction the collaboration goes in, in terms of product choice or color palette, for example, women who love Rykiel or Lanc‚Äö√†√∂¬¨‚Ä¢me will be glowing when this hits the shelves.

So it seems to be a consensus between the two partners that the two brands match up in terms of target consumer. And with the extent to which these brands seem to line up is sure to result in lovely cooperation, which could mean more collaborations later on down the road. Just keeping our sights set on this collaboration, however, it will be a five-month wait before the Sonia Rykiel x Lanc‚Äö√†√∂¬¨‚Ä¢me makeup collection is released, as it is due to come out in August. 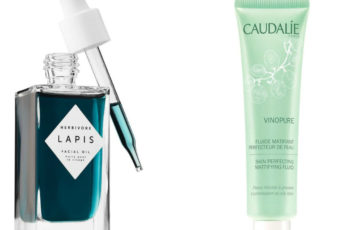 The Best Moisturizers For Oily and Acne-Prone Skin