While the hairstyles were given a more masculine, fiercer and more powerful take by stylist Anthony Turner, without the rugged effect, the clothing itself on the Salvatore Ferragamo fall/winter 2016-2017 ready-to-wear collection was distinctly feminine for the most part during the presentation on the Milan Fashion Week runway. What we were privy too was a whole lot of lines, from the zigzags across the shoulders to the horizontal and vertical stripes of color. There were even strips of black and white on some of those midi length dresses with the volume added in the skirts.

Lines were used on the boots as well that came up to the knees or ended at the ankles, lines appeared on the T-bar shoes and matching top and fringed skirts. The lines got jagged towards mid collection, appearing across the center of a dress to separate colors on top and the bottom, or as a myriad of colors going up and down capelets.

There were optical illusions, icicle skirts, houndstooth coats and a few interesting explosions throughout. There were checkered jackets over zigzag print tops. There was a whole lot going on but it all made sense at the end of the day.

Massimiliano Giornetti is without a doubt an amazing designer who understands the melding of colors and linear prints with ease. The lines thus moved from the head through the clothing and down to the shoes, ending at the floor, really bringing in the love for art in this rather special line-up of pretty outstanding outfits.

The hair was almost as interesting as the clothes themselves. Combed into a box section first at the top of the head, the lower part was isolated, combing it into a low ponytail with nary a strand out of place. Gelling up the top section, it was brought over to one side, crafted into an S-shape, molded correctly by hand and combed and left looking lacquered. The visage created was going for the soft and pretty, while the hair focused on the strong and tough.

Flushed cheeks and light contouring with a bit of shadow over the eyes to highlight things up, the brows targeted and filled in, as well as lips done up in the trending hues for 2016; this is what the makeup consisted of only. The girls were lovely, and with the minimal color to the face, the focus would go down to the clothing in of itself, which was superb to begin with.

We will definitely be investing in that gorgeous red cape coat actually, that appeared last in the line, while those T-bar shoes in a pretty ocean spray blue are looking to be a rather intriguing option to don on for our fall events. We might also pick up that tiered stark white ruffle-skirted dress with the turtleneck and long sleeves, though changing the shoes with it to something that speaks more fall than winter overall. 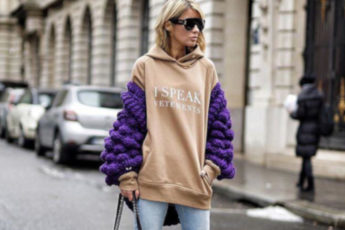 Go from Casual to Chic in a Sweatshirt