Often nicknamed as an haute couture genius, young Italian fashion designer Giambattista Valli is extremely skilled when it comes to ready-to-wear too. For his Giamba fall/winter 2016-17 ready-to-wear collection, of course unveiled at Milan Fashion Week a few hours ago, Valli chose to combine together elements from both worlds, for the very first time in his life. “I started from a moment when uptown and downtown were really two separate worlds,’ said Valli backstage, leaving it up to his proposals to further complete the sentence with facts rather than mere words.

Valli definitely took everything he knew about fashion and fearlessly went out of his comfort zone, intertwining high-end with low elements inspired both by his elaborate tastes for haute couture and the main contemporary suburban cultures. He went so far out of his fashion comfort zone that he even added black and pink zebra patterns, as well as punk-rock elements to most of his pieces.

Haute couturier Valli thus poured out his urge to create fancy proposals by making sure no one could look at his Giamba fall 2016 ready-to-wear collection and possibly claim it’s a minimalistic one, as it literally features any kind of texture, attachments and prints one could ever think of. Aside from animal patterns, Valli filled his lineup with retro butterfly prints, polka dots and pop motifs too, focusing on color-blocking contrasts, such as pink and black to vigorously catapult us back to the Eighties.

The rockiest decade of all is to be found in the many layered A-line dresses with sweetheart necklines and laced hems, which could be moreover regarded as the newest ‘Girls Just Wanna Have Fun’ anthem. Besides iconic Cyndi Lauper, Valli also took actress and writer Cookie Mueller (you may remember Muller’s role in Pink Flamingos) and performer artist Greer Lankton as his fall collection’s muses, using their quirky, iconic and lifelike-doll looks in his designs, paying homage both to their elaborate costumes and inspiring open minds. They were key figures in the Eighties underground scene, and Valli couldn’t of course exempt himself from drawing inspiration from their post-modern, post-gender outfits.

Complicated and always unashamedly decorative, Valli’s proposals were of course intricate here as well, as they got embellished with loads of pleats, frills, furry attachments and visible rims too, not to mention the incredible handicraft skills he used to sew all those sequined collars, shirts, jackets and skirts onto most of his pieces. Babydolls, lace bodices, corsets and leather bustier bras represent the Eighties’ sexiest side, revealing us Valli’s most suburban and pop-ish side. He also took the latest years of the Eighties/earlier years of the Nineties to explore the grunge and hip-hop subcultures, translating them to oversized mannish hoodies and creeper sneakers.

Although being sort of unconventional, the Giamba fall/winter 2016-17 ready-to-wear collection remained faithful to his one and only purpose, which is in the end all that matters when it comes to ready-to-wear fashion: make women look beautiful and proud to express their unique personalities through their outfits. 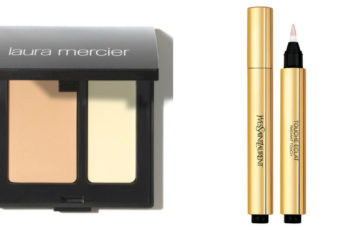 Tested & Approved: These are The Best Concealers of 2019