Where did the spring 2016 futuristic trend go? Well, it went straight to the Open Ceremony fall/winter 2016-17 ready-to-wear collection, the fashion show of which filled the New York Fashion Week with appealing looks from a not-so-distant future. Opening Ceremony’s creative directors Carol Lim and Humberto Leon have been on a journey that led them approximately to 2100, treating us to an array of dystopian looks that are very wearable and easy to be played with despite being quite quirky in lines, cuts and even material.

Lim and Leon, who have been revolutionizing Kenzo with their modernistic and futuristic points of view since 2011 as well, often inspire us with their contemporary exotic suburban takes on fashion, which are frequently close to the Asian urban subcultures and youth movements. Their irreverent views are much influenced by the designers’ educational background, which brought them close to such historical fashion houses as Burberry, GAP and lastly Kenzo. That said, it shouldn’t be surprising to discover that their Opening Ceremony fall 2016 collection is so eclectic and avant-garde at heart.

According to Lim and Leon, our not-so-distant futuristic outerwear will be all about feeling at ease and protecting our bodies from bad weather, without however feeling the urge to give up on our personal styles and tastes. That’s why it is possible to find basically any kind of color, print and material within the line-up’s proposals, from total black looks to a mishmash of fantasies, from latex fabrics to translucent velvet materials. Iridescent metallic hues are of course to be found here too, although being less bright and thick compared to the previous futuristic spring/summer 2016 fashion collections. Far cry from what is conventionally regarded as futuristic fashion is Lim and Leon’s choice to give velvet a chance too, as it is very unlikely to see this fabric in a dystopian fashion environment.

As far as the colors go, Opening Ceremony’s potpourri of hues seems to specifically focus on color-blocking motifs of almost surrealistic fantasies, which include urban scenarios and mixed design patters, such as Inception-inspired big elliptic polka dots, Cubist zebra-patterns and aeronautical prospects. Inspired by conceptual artist Syd Mead, also known as the master of futurism, most of the collection’s pieces show influences from his works, through which he has often collaborated with the movie industry (Syd Mead’s projects include collaborations with such films as Blade Runner, Star Trek, Aliens and Mission Impossible III).

Then despite being mostly relaxed in lines, the Opening Ceremony FW 2016-17 collection explores slightly sharper lines too, drastically changing the way we look at fashion classics, including pencil pants, anoraks and blouses. As for the more relaxed pieces, Lim and Leon opted for contrasting motifs, such as asymmetrical zip lines, which add dynamicity to the delicate off-the-shoulders sweaters and billowy overalls.

Open Ceremony’s next fall season has room for sensuality too, which could be easily spotted within the very few, yet quite remarkable fishnet tops, transparencies and curve-hugging tops and midi dresses that effortlessly enhance the figures. As soon as the line-up draws to a close, Lim and Leon call us back to order some well-refined structured pieces that will make any Star Trek fan giggle. 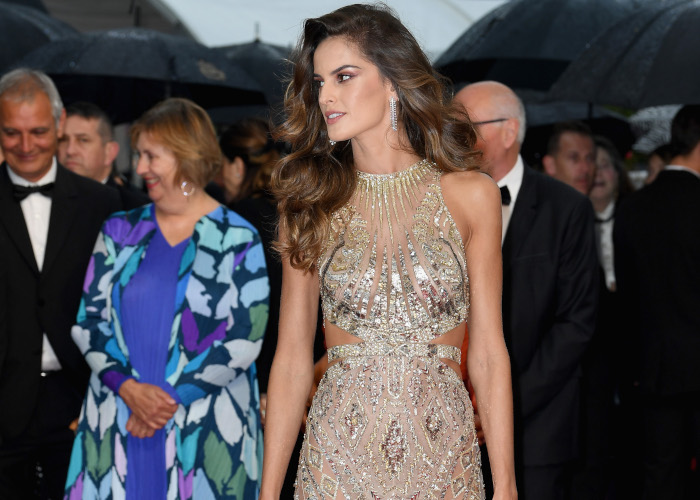