We’ve all been swept up in the hype of the annual Victoria’s Secret Fashion Show, which occurred on Nov. 10 and will be broadcast on Dec. 8, especially now that gorgeous runway photos of the looks have been released! But we won’t be able to see the vibrancy of the show until it is aired, so we have looked elsewhere for more inside looks ” going backstage at the Victoria’s Secret Fashion Show 2015!

An aspect of the VS fashion show is its high levels of energy, both on the runway and behind the scenes. With the fun, young models cast this year, we knew there would be plenty of fun buzzing around backstage before and after the show, especially with friends and fellow VS-newcomers Kendall Jenner and Gigi Hadid in the mix.

“It’s just a very happy moment,’ Jenner said in an interview with Vogue.com. “It’s something that I’ve always dreamed of, so I’m naturally excited.’ The model went on to express her happiness of working with her friend in this way, because they were both able to live out their dreams. “It’s really nice that we’re getting to do it together and spend this time together.’

Hadid herself had an extraordinarily emotional casting for this year’s show, with the taping of her reaction now posted all around the online media stream. Her excitement didn’t die down since that moment, either, since she had been striving for the casting.

“I’m just trying to be calm, honestly. I woke up and listened to Disney music and lit candles,’ Hadid said in her interview with Vogue.com. And what a wonderful way to start off any day, if you ask me, let alone the day of your first VS fashion show!

These two ladies, along with the other 42 models cast in the show, spent hours preparing for the show, but that never stopped them from having fun. Victoria’s Secret has a lot of room to play when it comes to expenses, so of course they received treatment from some of the best stylists in the industry. This is a process sure to be a great deal of fun ” maybe for a little while! But there’s no wonder so many photographs are now circulating the media stream of the models getting progressively goofier and more daring with their personalities (and bodies) as the day went on.

Sometimes when you see a model walking the runway it’s hard to remember they’re everyday women, too, and just want to let loose and have some fun! While VS fashion shows are already pretty energetic and fun, there’s nothing quite like seeing our favorite models hanging out and being themselves.

It’s fun to look through the pictures of the preparation process, because it allows you to really see how everything fell into place. The pictures began as sweet and sexy, with simple kisses to the camera and a little peek-a-boo of the brand’s lingerie as they were having their hair done. But then you can see where the ladies began to grow a little stir crazy!

One of my favorite shots is of Behati Prinsloo, who is not new to the VS fashion show and has been an Angel since 2009. In the photo, she is standing on a table, posing with her head thrown back and the widest, most cheeky grin on her face. The model does look great in her ensemble, but her personality is still the star of this picture. There’s a level of authenticity to her smile that shows she is having the time of her life, probably much like her fellow models.

Models Taylor Hill, Martha Hunt, Stella Maxwell, Sara Sampaio, and Jasmine Tookes are all new Angels, but not all of them are new to the VS scene. Tookes herself has been in four previous shows, and has finally achieved the coveted Angel status, while Maxwell just feels lucky to have been cast.

There are a lot of things models must sacrifice when preparing for a big show such as this, and Hill, Hunt, and Sampaio had a similar mindset for just what they’d be doing once the show was filmed and the after party began. “Eating pizza,’ was the unanimous response when asked about how they would personally be celebrating after the taping. All the three models seemed in agreement about this, but Sampaio put the background into words.

“I’m going to take over all the pizza,’ she said. “You guys are not having any. I’ve cut carbs for the past 10 days and the thing that’s been on my mind is pizza.’

Great words from a gorgeous model! No matter where you’re at in life, nothing beats a slice of pizza after a hard day’s work. And I think these models deserve that little slice of happiness in their lives. 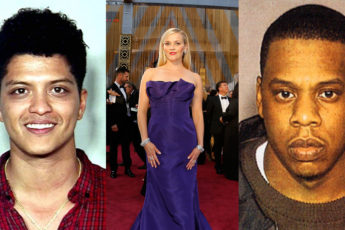 Stylish Celebrities That You Didn't Know Were Arrested