Makeup can be used to create an optical illusion, changing your face in a manner that’s utterly unrecognizable. Have you not seen makeup tutorials in which a man turns himself into a woman, one from a certain nationality suddenly creates the illusion that she is now of another? The use of powders, bronzers and contouring tools can change one’s features to resemble another’s in an impeccably unimaginable way. It can also be used to show that one is about 10 pounds lighter, simply by working in some makeup tips and tricks. It’s all about how you style the features on your face. And who doesn’t want to look slimmer, even if it is only on the face?

These six pro makeup tips to slim your face we’ve pulled together should help you hide behind a new fa‚Äö√†√∂‚àö√ºade, using the tools available to you to create an entirely different image. Most people look extremely different without the use of makeup, which is particularly apparent in celebrities, who suddenly appear very normal when they are going about their days without the red carpet glamour looks. Each and every one of us is able to create this optical illusion, if only we manage to use the products before us correctly. This list should help in achieving that seemingly far-flung goal.

1. You will need correct shading: What many who are new to the makeup world don’t realize is that dark shades help make things recede, while lighter colors bring them to the forefront. This can be maximised on by utilizing a matte bronzer that’s a shade or two darker than the skin tone to carve out the features you want, while a luminous highlighter that’s a shade or two lighter than your complexion will help create new shapes to your cheekbones, nose, brow region and chin. Using a makeup brush is highly recommended, as you don’t want to leave streaks behind, while the type of product you use can be either creamy or powdery; the latter is often a better choice in the summer or generally warmer months.

2. Change the bronzer to a powder: There might be wisdom in the old adage about not using bronzer to contour if you want it to be done correctly. Instead of that warmer shade that this product gives off, opt for a more neutral shade of taupe with grey undertones so that it blends in with your natural looks better than a bronzer ever could. Contouring should be subtle, done with a steady hand and lots of blending so that there are no lines and no streaks left behind. There are also certain brushes known as sculpting brushes that can be used to create the best effect. The powder should be applied to the hairline in order to brighten up the rest of the face then move from the arch of the brows to the temples, before jumping to the cartilage pump of the ear and extending the line to the commissure of the lip. The nose can be slimmed down by drawing a line from the brown downwards, while the soft jawline can become more angular with powder used for contouring and blending under the chin.

3. Thicker brows are better: As strange as it may sound, the thicker you leave your brows and groom them well in that regard, the slimmer your face will appear to be, as it helps divide open spaces in such a way that the focus is brought to the brow region. The longer they are and the fuller they look, the better the effect on your face overall, with the features appearing smaller and not quite so protruding. The more natural the brows look, the better it is for the effect you are trying to create with their thickness. Also, creating a higher, more pronounced arch will balance out a rounder face and stretch it out more vertically in the process.

4. Opt for the cat-eye: The cat-eye look is one of the most attractive and with good reason. Other than the face that slanted eyes are more appealing overall, as well as the pleasant thoughts of felines that it incurs, drawing out the outer edges will make the rest of the face look narrower. The smokier the eye looks, the more contoured the rest seems to be. Of course, you should be careful not to overdo it, but this is definitely a look you should be going for. It creates a triangular effect, changing the inherent shape of the face and making the eyes the prominent feature, effectively drawing the focus away from the lower region. This is probably a good reason why models and celebrities often sport the cat-eye.

5. Highlights at the center: You really want to make you face look longer, especially if it is a rounder shape instead of an oblong, creating more distance between the north and the south instead of the east and the west. In order to do this, you should highlight the center of the face, starting from the Widow’s peak and moving town the nose towards the cupid’s bow of the lips. You can also keep going down and add some highlighter to the center of the chin in order to downplay its actual look. This way the attention is drawn away from the width and instead brings the focus to the length of the face so that it creates the illusion of a slimmer construction.

6. The focus should be on the eyes: There’s one thing we absolutely love about the latest trend of barely there makeup, and that is because the lips are left with a light gloss or pinkish lip stain, while the eyes become the focus of you masterpiece. When the lips appear larger or have too much color, it brings the eyes down, thus emphasizing a rounder countenance. On the other hand, when you leave the lips alone and create a bolder lash look, while using liner to make the eyes look bigger, the rest of the face automatically looks thinned out and needs very little contouring to complete the illusion.

Don’t miss: 20 Expert Beauty Hacks That Will Change Your Life 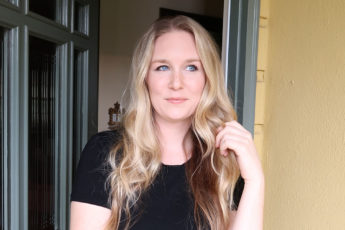 Get a Quick and Beautiful Makeup Look with Woosh Beauty

The Magic Tricks of Shaving the Bikini Area Without Irritation