Braids have been the best friends of women from unknown times (long before diamonds), yet they never seem to lose their relevance or become any less popular. The reason behind this is their flexibility, because as a hairstyle, braids are rather universal and they have been seen adorning this year’s fashion runways starting from New York and coming all the way to Milan and Paris. To provide you with the dose of hair inspiration, we have gathered here the most amazing spring 2015 braided hairstyles inspired from the runway! Browse through these flattering looks and find plenty of beauty inspiration both for day-to-day chic and for special occasion stunning looks!

Suno was the first to present us exaggerated fishtail braids during its spring 2015 collection show during New York Fashion Week. The braids gave elegant simplicity and charm to Suno models. This hairstyle instantly became trending and we are sure to see lots of stylish interpretations of it in the coming spring.

Mara Hoffman runway show during New York Fashion Week introduced us a new type of braid proposed by Nick Irwin. To get the “lived-in, destroyed desert braids”, the hairstylist advises “to pull apart the braid with your hands ‚Äö√Ñ√∂‚àö√ë‚àö√Ü pretend like you’re actually kneading bread”.

Irwin also worked with Maria Ke Fisherman’s models and created very intricate and detailed braids, the inspiration for which he had found in the “imperviousness of innocence and youth in the fractal city”. The braids looked rather complicated to weave, so if you are planning on getting something similar, be ready to devote at least an hour to the hairstyle.

The Peter Som spring/summer 2015 runway show did not lack braids either. This time Eugene Souleiman, the hairstylist working with the models, had chosen shorter and slickier version of the braids. The simplistic look was spiced up with wet effect applied to the front part of the hair.

Gyunel collection at this year’s London Fashion Week presented probably some of the most delicate braids. Darren Ambrose and the Wella Professionals had created messy hairstyles using different kinds of braiding techniques. Crown braids turned out to be the most romantic of them all.

Milan Fashion Week, however, turned out to be the show with the most “braided” looks. First we had Marco de Vincenzo models, whose hair was braided into long fishtail braids, using pink, blue, and yellow ribbons. The beautiful color plays added to the original hair tone of the models added so much sophistication and uniqueness to the ordinary fishtail braids.

Cornrows and knots on top of the models’ heads added a bit of edginess and charm to the looks of this year’s Giorgio Armani collection. The slightly textured feel only enhanced the effortless chic attitude of this hairstyle.

Orlando Pita, hairstylist for the Italian brand Giamba, had opted for narrow, neat braids to run through the middle parting of the hair of the models for the label’s spring 2015 collection. The hairstylist also urged us to try and make the braids ourselves by putting images of his creations with a caption saying “It’s young, it’s fresh, and girls, maybe you could do it yourselves if you know how to [create] #cornrows”. The seemingly invisible braids gave a touch of gracefulness and romance to already rather feminine collection.

The wonderful braided hairstyles spotted during the spring 2015 collection presentation of Rachel Zoe couldn’t but be in our top list of braided ‘dos too! The hairstyle featured a ponytail adorned with two tiny braids and a side-swept hair-headband, which gave a bohemian touch to the models’ looks.

Yet another creative ways of styling your hair into braids is suggested by Bibhu Mohapatra, during the show of whom the models came out wearing edgy braided buns with a leather string weaved into the braids. This definitely looks innovative and cool!

It wasn’t only the oversized hats that stunned at the Donna Karan spring 2015 show, but also the minimalist, yet totally glam braided hairstyles of the models. The look featured sleek front part and a super-long bulky rope braid that was literally drenched in elegance and sophistication.

For her DKNY collection presentation, Donna Karan also decided to use braids to boost the beauty of the models. Here we saw a sporty version of side braids spiced up with an edgy wet look applied to the front part of the hair. Pretty impressive!

Just like the entire collection, the braided hairstyles at Michael Kors were also extremely effortless and chic. We saw low messy braids with lots of face-framing flyaways. This is the best option to try for impressive daily looks!

We instantly fell in love with the sleek braided buns spotted at Tadashi Shoji. The braids were fastened low on the back, while the front part was sleek and elegant!

At Dannijo we saw a hybrid of fishtail braids and a sleek ponytail. At the root the hair was plaited in a bulky fishtail braid, while the remaining part of the ponytail was left natural.

Yet another interpretation of the classic fishtail braids was presented by Tome. During the show, we spotted models wearing fresh and minimalist fishtail braids with sleek finishes for the front part of the hair.

Vivienne Westwood tried to add a modern and unique touch to the classic milkmaid braids, presenting an updo, which looked somehow unfinished and kind of clumsy. Almost everyone can style such a hairstyle!

We are sure the everlasting trend of braided hair is going to follow all the sassy fashionisers into the new bright season and not only. This big diversity of braided hairstyles can serve as the best source of inspiration for you to look cool and one-of-a-kind on various occasions!

The 10 Best Blonde Pixie Cuts of All Time 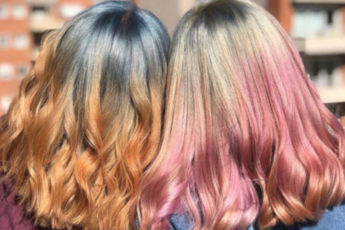 The Ombre Hair Colors That Will Be Huge This Summer