Today Italian fashion house Giorgio Armani produces several lines of clothing: Giorgio Armani, which designs haute couture and men’s and women’s ready-to-wear; Armani Collezioni specializes in hand-knitted sweaters and tight, figure-fitting suits; Emporio Armani combines Italian style with casual elegance; Armani Junior helps to dress the youngest of fashionistas and so on. As you may recall, Milan Fashion Week has already presented to us one of the diffusion lines of Mr. Giorgio Armani, the father of the world know Italian fashion brand. This year’s Emporio Armani collection was calm and relaxed designed in all shades of sea blue. Now the time has arrived for us to check out the Giorgio Armani spring/summer 2015 collection presented by the main clothing line of the brand, which bears the name of the talented Italian master of fashion.

Giorgio Armani, who recently confirmed he was going to be the designer to dress George Clooney on actor’s fast approaching wedding day, found inspiration in the sea and the calm and light atmosphere surrounding it for his Giorgio Armani spring/summer 2015 collection.
The collection presentation commenced with a parade of animal skin printed pieces. Snakeskin, again and again proved to be of current interest for designers. Armani had used the pattern to design coats and thin jackets. The leopard print as well was not missing from his collection. The print had been used in short pants with matching jackets. Armani had also applied it to oxford shoes and rectangular clutches. The color palette of the collection was rather diverse as well. The reigning color, of course, was the blue in its whole glory. White, beige and black also made an appearance.
Not forgetting about the theme of the Giorgio Armani spring/summer 2015 collection, the designer had decided to adorn the hems of dresses and skirts with thin fringes making them resemble fish tails and scales. Continuing the trend of wearing off-shoulder dresses over different types of tops, Armani had designed a dark blue deep V-neck dress, which was worn over a silky sleeveless blouse in a lighter color shade. Short skirts and sometimes even dresses were paired with wide leg loose trousers (yup, you read that right) and matching tops. Mini dresses in dark blue designed with cotton and silk patched together deserved a special attention as well.

All white looks presented at the end of the show provided the whole show with some sense of serenity and purity. As a final reminder of the theme of the collection, Giorgio Armani also presented a light blue strapless dress, which was literally wrapped in a sheer see-through fabric. The head accessories complementing the look and the absence of shoes turned the model into a real sea nymph.
The shoes, mostly in blue, remained flat throughout the whole presentation. Also noteworthy were several loop-like pieces of various sizes around the necklines and shoulders of the models.
A lot can be said about the Giorgio Armani spring/summer 2015 collection as the pieces presented at the show were not only numerous, but also every single piece was exquisitely detailed. But one thing is for sure: this was a collection for a woman, who loves light pieces not only in terms of fabrics used, but also in terms of color shades implemented. 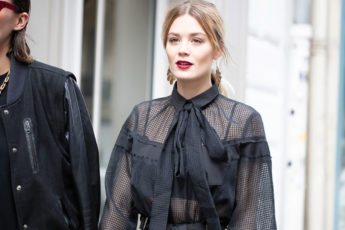 How to Dress to Attend a Show at Fashion Week