The Old and The New: The Most Iconic Hairstyles from Movies

When the old and the new collide, we have really unforgettable and nostalgically beautiful looks in front of us, which remind us of the good old times at the same time marking the glamorous comeback of certain vibes and details, proving that they are indeed viable nowadays too. Thus, now we are going to speak about the most iconic hairstyles form movies that still have not lost their popularity and are practiced and tried out equally frequently, especially for such important occasions as red carpet events.

Many of the devoted movie seekers might remember the uber-chic and feminine finger waves of Rita Hayworth, which did mark her most iconic looks and made her remain in our memory that way. Nowadays, this hairstyle has not left its followers, either. Lea Seydoux is one of the most proficient celebs in terms of creating fabulous red carpet looks with the help of this ‘do.

’50s and ’60s were the decades during which the voluminous hairstyles created with the help of hair sprays were really having a moment. Brigitte Bardot is one of the most popular owners of such hairstyles and we’ve seen her charming everyone with them not once. Talking about the modern interpretations of this ‘do, we can note gorgeous and cute Zooey Deschanel as one of the fans of voluminous retro ‘dos, which really make her look just beautiful!

3. Voluminous and Natural Hairstyles of the ’60s

Continuing the scrutiny of the most iconic hairstyles from movies, the following look we may note here is the voluminous with naturally wavy ‘dos of the ’60s, which were so popular for the movies of Jane Fonda. As for nowadays, the ex-Gossip Girl Blake Lively really manages to come up with some impressive and catchy interpretations of this hairstyle. In addition, you may also find some really awesome retro inspired and voluminous hairstyles in the range of the looks of famous and talented Adele.

4. Delicate and Formal Hairstyles of the ’60s

Saying never fading, iconic, and retro, we simply can’t help imagining Audrey Hepburn as the real icon for such looks. Thus, we may add one more amazing option of hairdos to our list, presenting the varieties of French chignons and updos matched with side partings and overall sleek front types. Diane Kruger is obviously one of the fans of such ‘dos, since we can meet her wearing this type of classy hairstyle quite often.

The retro and glamorous era of the ’70s was especially well known for the bangs having a moment then. This especially refers to the classic bangs like those Jane Birkin was always observed with. Such hairstyles most often coming up with messy touches and freely hanging hair can now be found with looks of Suki Waterhouse, who really manages to create the exact combinations for this ‘do.

6. ’80s or the Times of Glamorous Extravaganza

By the time, the hairstyles went more and more revolting and bold, and the ’80s were the beginning of the peak in this respect. This was the time when Madonna was going up to the stage with the braided top ponytail, adorned with all-sleek and delicately laid down locks. Nowadays, Katy Perry continues this tradition and does it quite efficiently.

While the previous decade was the period of getting everything to the extreme, the ’90s were the times when everything got back around the natural looks. This was the period of the naturally curly and messy hair, like those Julia Roberts typically had in the movies. Beyonce goes for no less effective and chic looks of this type, coming up with exclusively chic and natural hairstyles.

8. Smooth It Out: There Comes the 21st Century

As we enter the new century, the hairstyles shift towards straight and delicately smoothened out hairdos. Creating some layered and chopped ‘dos with strictly straightened and smoothened hair was what the heroine of famous movie series Friends Jennifer Aniston served as an inspiration for. Nowadays, cutie-pie Elle Fanning manages to create just as flawless and impressive hairstyles, opting for cute and charming straight ‘dos for her sun-kissed blonde hair.

The California girls’ style is what became an overwhelming trend for the newest decade thus marking the popularity of the chestnut and blonde tones of hair kept with long and naturally wavy textures and very impressive color plays for the tips. The inspiration is the British model Amber Le Bon, following the ‘dos of whom Poppy Delevingne really manages to surprise everyone with the cute and classy looks of hers.

The modern times we are witnessing right now are simply embedded with the most diverse and equally creative alternatives of the braided hairstyles, which come as key details for literally any occasion and look ranging from the casual combinations to the important red carpet occasions and parties. For inspiration look to the impressive hairdos suggested by Jemima Kirke or gorgeous Emma Stone. The blinding diversity of the types of this hairstyle really manage to become the hit of the decade marking the appearance of a totally new and great range of hairdos for everyone.

Here were the basic hairstyle varieties that we would like to introduce to your attention, again letting you to decide which option suits you most and which option you like most of all. Only after picking the exact options and making sure that it fits you, can you enjoy your classy and chic looks to the full. Each of these ‘dos has something specific and unique about it, also carrying the feel of the decade it comes from. Thus, be careful and attentive when picking one for you and just have fun securing the totally glam and striking looks!

How To Choose A Hairstyle For Your Face Shape 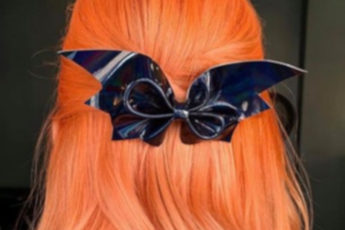 How to Style a Faux-Braided Updo