How to Get Rid of Belly Fat Easily

The problem of the belly fat worries very many people and, of course, first of all very many women. That’s natural since having a flat and smooth belly is sassy and beautiful but having it is not easy at all, especially for those, who are overloaded with work and family chores and visiting to the sports centers or gyms is practically impossible. On the other hand, the constant stresses may sometimes force one to eat more than what was needed. As a result, they acquire a big fatty belly, which is definitely not what most of the women would like to have. So here we are going to speak about the main ways with the help of which you can get rid of belly fat quite easily and without any additional stresses and tension.

Why Does the Belly Fat Appear?

There are a number of causes for the belly fat to appear and in order to be able to get rid of it we first of all need to find out why it appears. Thus, the most popular causes of belly fat go as follows:

The accumulation of fat in the belly can also be caused by the disrupted digestion. Because of the constant constipation, toxins may be accumulated in the organism. Consequently, the organism starts storing excessive proportions of fat around the belly in order to protect the body against these toxins. In other words, if there is fat accumulating in the areas of the belly, then this can indicate about serious disruptions of the gastrointestinal system.

Why Should You Fight Belly Fat?

The excessive quantities of belly fat, apart from not just looking cool, can also cause a number of illnesses. Some of the most noteworthy options are:

Certainly the basic reason for this is not the fat as such, but the disorders of metabolism. The fat you may find on the belly eventually covers all of the inner organs, distorts their normal functioning and hinders the excretion of fluid from the body. The belly fat is a serious matter to think over and to try to make adequate changes in the lifestyle to get rid of it.

Cleaning the Intestines for Getting Rid of Belly Fat

First of all, we need to note that removing the belly fat in one week is impossible, however easy methods we may suggest and this is especially true of the DIY homemade treatments. Whatever you may do, you won’t be able to get rid of fat in a wink. This is a long procedure requiring regularity, patience and essential efforts.

Thus, the very first step towards having flat belly is cleaning the intestines. This might be carried out via different means. One optimal variant for this is losing weight with the help of enemas and oil cakes. With the help of the former, you may lose up to 20 kg of weight.

When carrying out the cleaning procedures with enema, you should take into account the special regimen and diet, too. The very first thing is that you need to eat Lenten food. There are two schemes of cleaning the intestines using the enema, which go as follows:

While carrying your cleaning procedures with enema you should take into account some special rules and first of all you need to consult the doctor about it before passing to the procedure.

After the course you need to recover the intestines with the help of bran or oil cakes. The first is efficient with not only cleaning and recovering the inner walls of the intestines, but also contributes to the further weight loss, since it is made of roughage. It’s recommended using 30g of bran and necessarily drinking more water.

Instead of bran you can also use oil cakes. That is whatever is left from the fruits and vegetables when they are getting squeezed. They have a similar effect with the bran. You need to take not more than three tablespoons of oil cakes daily. When fighting against belly fat, using beetroot pomace is especially effective, since it also decreases the appetite.

After you’ve cleaned your body from fat thoroughly, you can pass to the physical exercises and proper diet. After everything has been reduced you need to bring the body back to tone.

Two most effective exercises for belly are twisting the hoop and doing sit ups. With the help of the hoop the muscles of the waist get warmed up and the blood circulation improves there fastening the metabolism. After that you can pass to the abdominal exercises, which can be of two basic types.

You can find a huge number of such exercises with all of their variations and choose the most optimal ones. It’s very important to carry out the exercise correctly, technically and proportionally, following the breath and gradually increasing the load. In the end of the exercise you should feel fatigue in the muscles of the belly. In order to have maximum effective results you shouldn’t give yourself a single moment of indulgence.

In addition, here are some effective examples of abdominal exercises.

• The starting position is lying on the floor with bent knees. In addition the heels should be placed maximum close to the buttocks. The hands should be placed under the head, and the elbows placed in opposite directions. You need to lift the torso without joining the elbows and make them touch the knees. This exercise is for the upper press muscles. If you touch the right knee with your left elbow and vice versa you will also work out the side belly muscles. It’s enough doing 30 crunches for the upper and side muscles.

• For the following exercise the starting position is lying on the back. You need to lift the stretched legs and hands simultaneously, trying to touch the tips of the legs with your fingertips. The repetition of this exercise should be not less than 20 times.

• Finally for the next exercise the starting point is lying on the back again, placing the hands under the head, elbows put in opposite directions. What you need to do is make a basic crunch lifting the torso up to the two thirds of the spine and slowly go back to the starting point. This exercise should be repeated until feeling fatigue in the upper belly muscles.

If you do these exercises daily with the given proportions you will secure one more condition for getting rid of belly fat easily and the results will be already visible in two weeks.

One more important step to having flat belly is keeping the right diet and using correct proportions of certain food. The most important thing here is leaving overeating in the past. It’s important to regulate the process of food consumption and include more food that has cellulose. Everything containing big proportions of calories and fat should be excluded from the diet. One more important rule is that the last intake of food should be no less than three hours before going to bed. Correct diet will help you regulate the digestion and the metabolism and this will in its turn contribute to the regulation of all the rest of the processes going on in the organism.

Nowadays, one more popular type of diet is organizing all with split meals. This presupposes frequent intake of food, up to six times a day but with small proportions. The most essential thing is not to have a feel of hunger. It’s important to include more fruits and vegetables as well as to drink no less than two liters of water daily. Cutting down on alcohol is another great thing to do when trying to get rid of belly fat. Alcohol only contributes to the creation of hormones, which in their turn provoke the creation of belly fat, also making the whole process of food consumption uncontrollable.

This is a complex way of solving the problem of belly fat, working on it from different directions and securing the great results. With the help of physical load and correct diet you’ll be able to get rid of this problem much easier than in case of using different other means not connected with lifestyle changes. All you need to have is a little bit of will power and strong wish to have flat belly and you will certainly have it! 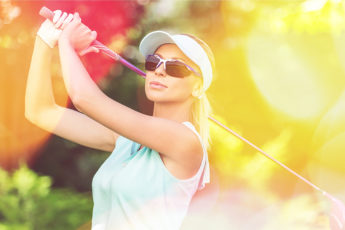 How Golfing Can Help You Get Fit 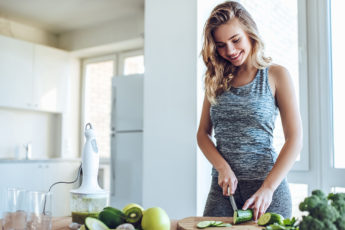 October 27, 2014
« Previous post
How to Choose a Stylish Plus Size Dress?
Next post »
Elegant Party Hairstyles for Short Hair