Finally, it’s high time we introduced and discussed the main fall/ winter 2014-2015 hairstyle trends that have been observed during the most popular fashion shows of fall 2014 fashion weeks. What the fashion giants have prepared for us this time can be described as a modern fantasy of colors, innovative designs, and curious interpretations and just as unforgettable hairdos. Thus here we go presenting the basic hairstyle trends for fall/ winter 2014-2015!

This is the first and one of the most impressive alternatives we are going to talk about. Coming with the most diverse and interesting interpretations, these side-swept ‘dos really have their deserved place in the most frequently met variants. Alexander Wang, Richard Chai, Zimmermann, and Peter Som are several of those having opted for this type of hairstyles. The textures and overall shapes are varied, still the principle of including the side-swept element is what unites all these diverse options.

This is one of the most ethereal and popular variants we happen to see among the collections for any season. Braids are what we see as basic key ‘dos for the looks of Marchesa, Marc by Marc Jacobs, Creatures of the Wind (where the romantic front and classic French braids may be seen), Nanette Lepore, as well as Yuna Yang, Whit, and Bora Aksu, in case of which we also notice the comeback of vintage and retro. For more sophisticated variants, you may also turn to the shows of Jackie Fraser Swan. The interesting thematic suggestions of Tibi and Helmut Lang are also noteworthy. Nanette Lepore also came up with interesting variants of the braids, presenting the cute French braid put on the front and adorned with a side swept look. The punk and Goth-inspired sophisticated braids of Concept Korea are also worth noting. Braids with ribbons and scarfs are also here, particularly presented by Honor. The options suggested by Dolce & Gabbana, and Givenchy are also unbelievably cool.

Coming to uber-modern hairstyles, we may start our scrutiny with the ultra-innovative wet hair effect, preserving its popular positions for another season in a row. Thakoon and 3.1 Phillip Lim do suggest opting for this type of hairstyles for total glam. We may also add the options by Lanvin, and Christopher Kane to the list of the best.

Having become another ethereal hairstyle adorning every single fashion show for any season, the classic ponytail never cedes its positions to any other ‘do. Thus, the coming season may also be called another hegemony of ponies, presented with the most diversified and great options possible. In this way, Rag & Bone came up with a messier look, Band of Outsiders suggested a classic low ‘do with side parted hair, and Rebecca Minkoff offered the classy low option with slight touches of effortlessness, while Victoria Beckham presented the absolutely effortless alterative made of central parted front and low ‘do at the back. Some other messy ‘dos include the ones suggested by Sally LaPointe. Byblos, Maison Martin Margiela, Valentino, Chanel, Fendi, and Herve Leger are all in for the top suggestions, too.

Another timeless synonym to chic and glam is embodied with the French twist, always accompanying the best and the most elegant evening looks. Thus, what Monique Lhuillier and Altuzarra suggested for their best options were combinations including both classic and modern interpretations of the French twist, also adding some touches of effortlessness.

Coming to comfy and casual alternatives, the designers again were on the side of buns and ties. Diversity is the say here, too. In case you like to have some example at hand, the collections of Jenny Packham, Diane Von Furstenberg, Carolina Herrera, Marissa Webb, Rag & Bone, Altuzarra, Christian Siriano, and Naeem Khan are always there for you. And, of course, so are the options by Monique Lhuillier. The cute ballerina buns were the basic concentration of Roberto Cavalli, Prada, Altuzarra, Jean Paul Gaultier, Marchesa, and many others.

This is the next message of the stylists for the coming season. The slightly messy accents are what compose the basic ‘dos of this type. The collections of Jill Stuart, and Marissa Webb are some great examples of the combinations with messy looks, whereas the super sleek options include the collections of Carolina Herrera, Ohne Titel, and Prabal Gurung. Richard Chai suggested a more casual version with naturally wavy finishes. For the absolutely straight ‘dos, you may look through the show of Suno for inspiration. Rebecca Taylor and Tanya Taylor collections are also noteworthy in this respect.

The following uber-curious and spectacular trend we would like to introduce is composed of the hairdos with a huge number of pins. They thus cease being simply meant for securing the hairstyle and fixing it, but acquire a decorative function instead, accompanying their functionality. Zac Posen, Zimmermann, and Reem Acra present some very successful interpretations of that type.

Colors also matter in the overall fashion trend creation, that’s why we can’t but also talk about the basic hair color shades trendy for the season. Thus, we can name the red tones of the hair of models during the Vera Wang show, as well as the brownish accents of the Duckie Brown show models. Some other alternatives include the shows of Marc by Marc Jacobs, Vivienne Tam, and Tanya Taylor.

The following target of experiments for the stylists this time has been the bangs with all of their shapes and styles. Thus coming with shortened and chopped textures, sleek ‘dos and faux ‘dos, they form a unique aspect of the fashion trends. Zac Posen, Giles, and 3.1 Phillip Lim presented some noteworthy options in this respect. Alexander Wang and Oscar de la Renta also came up with their own interpretations of this type.

Sleek ‘dos form the next significant and catchy array of options, the interpretations and diversities are again numerous, and in this way they include all the peculiar and compatible hairdos that are possible to put together with the sleek shapes. Thus for the classiest looks you may look through the collections of Carolina Herrera and Ohne Titel. The combined updos by Donna Karan are also worth mentioning.

Coming to more sophisticated hairstyles, we may also talk about the braided updos, again preserving their popularity among other ‘dos. The chic options presented by Whit are some of the catchiest alternatives. Another cool option is suggested by the Creatures of the Wind. Josie Natori also came up with a cool combination of braided buns.

We simply couldn’t do without curly and wavy ‘dos, and the stylists certainly know about that. That’s why here we also have a wide choice of uber-feminine and stylish wavy and curly hairstyles, capable of securing any look of yours, meant for any occasion. For inspiration, look to Burberry Prorsum, Rochas, Blumarine, J. Mendel, Elie Tahari, Cynthia Rowley, Sass & Bide, Betsey Johnson, Ralph Lauren, Alice + Olivia, Tommy Hilfiger, Jill Stuart, and Prabal Gurung as well as Chloé, Isabel Marant, Gucci and Rochas.

For the top modern and cool options, the collections also featured a range of bob hairstyles, again preserving the diversity of choice. Thus, for messier options, you may turn to the suggestions of Michael Kors, for classic and blunt variants have a nosey at the show of Marc Jacobs, for longer options Custo Barcelona is the way, for alternatives with fringes get inspired from Anna Sui, for classics look to Tory Burch, for volume Milly is the way, and for top youthful options go for the looks by DKNY.

This is the following catchy and impressive option we observed during the shows. Mainly put on the crown, the voluminous part secured the chic of very many hairdos. Such were the options by Nina Ricci, Oscar de la Renta, Versace, Carolina Herrera, and Dsquared2.

And here we are done with one more basic list of the domineering fashion trends of the coming season. Providing you with the basics of the hottest fall/ winter 2014-2015 hairstyle trends, we leave the rest on your disposal so that you are able to pick the options you liked most and just to enjoy them! 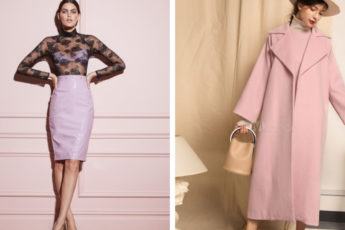 Brighten Up Your Fall Style With These Chic Pastel Pieces

February 18, 2018
« Previous post
Precious Beauty Tips and Tricks From Our Grandmas
Next post »
How to Wear Sapphire Blue