How to Get Rid of Bags Under Eyes

There may be a number of reasons for the appearance of the puffy eyes. Those causes may include problems with health, the lack of water in the organism, fatigue, not enough sleep, etc. Still, what is certain about this problem is that we generally need to get rid of it as quickly as possible. Just like the causes, there are also some diverse ways of solving this problem. One way is just concealing the puffy look with makeup and cosmetic means, but a better alternative is getting rid of the reason of its appearance for way better results. Thus, both of the variants are what we are going to speak about more in-detail now. So, let’s find out how to get rid of bags under eyes for good and have healthy, radiant looks!

1. For the quickest and one of the most effective treatments you may use a simple ice cube (Check out: DIY Ice Cube Beauty Tips). Early in the morning as you wake up, just take an ice cube from the fridge and rub it over the skin of your face, especially concentrating on the puffy areas under the eyes. This stimulates the blood flow and helps you to get rid of the bags under eyes quite quickly.

2. As for the creams you my use, concentrate on such options, which have the extract of parsley, sage, horsetail, coffee, elastin, collagen, or hyaluronic acid. All of these ingredients are again well working for the stimulation of the blood circulation, thus being irreplaceable saviors for you.

3. In addition, you may also get rid of the puffy eyes with the help of tea bags, which you need to put on the puffy areas for some 5 minutes and take them off.

Traditional Treatments for Getting Rid of Bags Under Eyes

1. There are a number of effective traditional recipes having passed from generation to generation and presenting really great ways of dealing with this problem. One of those suggests using the ice prepared with some herbal extracts. For one effective variant you may use 1 tbsp. of dried chamomile or fennel and pour some boiling water over it, letting it cool and placing this in the fridge to get the ice cubes.

2. The same ice cube technique can also be prepared using the tea decoction and letting it turn into ice for the further application.

3. Creating some contrastive combinations can also help you get rid of puffy eyes effectively. For instance, you may take 1 tsp. of chamomile or fennel and boil it in half a cup of boiling water. After 15 minutes filter the mass and divide the liquid you get in two parts, putting the first for cooling. Take a cotton ball for soaking it in the first half and another ball for the second. Further just put the balls to the areas under the eyes starting with the warm one and following with the cooler. Repeat the process every day before going to bed for about a month and you’ll have really impressive results.

4. Another cool treatment you can go for is that made from parsley. To prepare it you need to take fresh parsley and chop it into tiny pieces. Next take 1 tsp. of it and add 0.5 cups of boiling water letting it stay for 15 minutes. After this, moist a cotton ball in the parsley tincture and put it on the problematic areas for some 25 minutes.

5. Using the mixture of parsley and sour cream, you can also make a mask for the areas around the eyes. For preparing it you need to take 1 tbsp. of chopped parsley and mix it with 2 tbsp. of sour cream also adding some milk to make the mixture fluid. Apply the mixture, wait for 25 minutes and wash it off with tea. Repeat this once for 45 days.

6. Potatoes are no less effective when dealing with puffy eyes. It can be used both in boiled and raw condition. For the latter you may cut off some two slices and put them on the eyes, waiting for 20 minutes. Or else you may take some mashed potatoes mix it with milk and apply it to the areas around the eyes. After 30 minutes just wash off this mask with cold water.

7. Another effective way of getting rid of this problem using potatoes is preparing a mask of one grated potato. Put the mash to the under-eye areas once in a week for some 30 days.

8. In addition, you may also take 0.5 tbsp. of grated potatoes, mix it with oatmeal and add some milk to get a dense fluid. This mask needs to be applied to the puffy areas for 15 minutes.

9. You can also create a mask with the help of mixing 1 tsp. of grated potatoes with 3 tsp. of milk and 3 tsp. of flour. You should let this mask on for 10 minutes.

10. Finally, the next treatment can be prepared for getting rid of both puffy eyes and the dark circles around the eyes being a no less frustrating problem. To prepare this you need to grate a potato and a cucumber and mix them with tiny chopped parsley. The mixture you’ll get has to be put on a cotton ball and placed on the eyelids for 17 minutes.

Getting Rid of the Puffy Eyes Quickly in the Morning

1. The very first way to get rid of the puffy look quickly and effectively is using the frozen decoction of dried or fresh parsley. For the best results you need to rub the ice cubes over the puffy areas with massaging motions and after repeating the whole process for several times, finish off the procedure with applying some nutritional creams.

2. You may just create the contrasts using a cotton ball moistened in hot water and the second one for holding cold water and putting them on the areas one after the other.

3. A no less effective way is preparing a compress of cucumbers. It’s enough to repeat the application for some 3 times by 3 minutes.

4. Go for special exercises. Take the lotus position and move your eyes to the right and to the left. Afterwards squint your eyes and quickly open them. Repeat both exercises for 6 times. And to finish just make some circular motions with the eyes clockwise and counterclockwise for 3 times. This exercise will help you get rid of the puffy eyes as well as have a clearer vision.

Finally, when speaking about the reasons of the appearance of puffy eyes, we should note about one of the most direct causes being the nicotine and alcohol penetrating into blood. Try to cut down on such bad habits and you will have great improvements not only with your health but with your beauty as well. As soon as you notice those bags go, don’t forget to get enough sleep totaling to 8 hours per day. Also remember about the age factor, in case of which the bags under the eyes can be overcome with the help of including some more vitamins and products rich with antioxidants, which will fight aging, slowing it down and also contributing to getting rid of puffy eyes.

How to Plump Lips Naturally 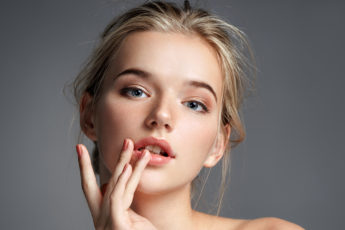 10 Quick And Easy Ways To Achieve A Seductive Look